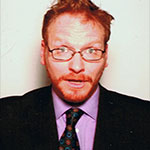 Don't sweat it if you've never heard of Aaron Kuder. He's only been doing this comix thing for a few of years now. In that short time though, he has had the privilege of working on some completely amazing projects. He's drawn zombies and robots and athletic people wearing spandex and puppies and inter-dimensional evil villains... all of which Aaron has enjoyed immensely. He's been honored to work on projects that have become New York Times best sellers. Most recently he's been partnered up with Greg Pak to work on Action Comics. It being Superman's 75th birthday and, well, it just being Superman, Aaron often wakes up before his alarm with a smile.[1]

Retrieved from "https://reedpop.fandom.com/wiki/Aaron_Kuder?oldid=4533"
Community content is available under CC-BY-SA unless otherwise noted.