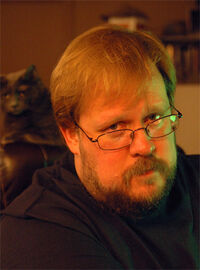 He is best known to American comic book readers for his renderings of pinup-style female characters, and his cover work on titles such as Wonder Woman and Catwoman.

He will be one of the guests featured at the New York Comic Con 2013.

Retrieved from "https://reedpop.fandom.com/wiki/Adam_Hughes?oldid=4489"
Community content is available under CC-BY-SA unless otherwise noted.