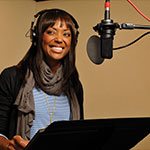 Aisha Tyler's hot-streak stint at the head of E! Entertainment's Talk Soup landed her firmly in the Hollywood spotlight and revitalized the Emmy-winning show, which she was the first woman and African-American to captain. After leaving Talk Soup, Tyler moved quickly into television and film roles, enjoying another first , the first African-American to play an extended character arc on NBC's Friends. She co-starred in Ghost Whisperer, had extended roles on CSI and 24, and has made numerous appearances on shows including Nip/Tuck, Curb Your Enthusiasm, Reno 911! and more. In addition to voicing 'Lana' on Archer, Tyler is currently a co-host of CBS' The Talk and also co-stars in XIII on the REELZ network. On the big screen, she has had roles in Bedtime Stories, Death Sentence, Balls of Fury, Black Water Transit, .45, and Santa Clause III to name a few. She is also the creator and host of an award-winning podcast, Girl on Guy, and a celebrated author, having released Self-Inflicted Wounds: Heartwarming Takes of Epic Humiliarion and Swerve: Reckless Observations of a Post-Modern Girl.[1]

Retrieved from "https://reedpop.fandom.com/wiki/Aisha_Tyler?oldid=4634"
Community content is available under CC-BY-SA unless otherwise noted.