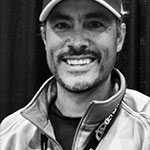 Alex Sinclair is celebrating his 20th year as a comic book professional and colorist. He was the first colorist hired by WildStorm back in 1993. With the purchase of the studio by DC Comics, Alex's career gained wider attention and really took off with his work on Batman: Hush. He has since worked on many projects including Blackest Night, Flashpoint, Superman: For Tomorrow, Batman and Robin, Earth 2, Harley Quinn and Justice League. His current projects are Superman Unchained, Green Lantern and Astro City.[1]

Retrieved from "https://reedpop.fandom.com/wiki/Alex_Sinclair?oldid=4543"
Community content is available under CC-BY-SA unless otherwise noted.