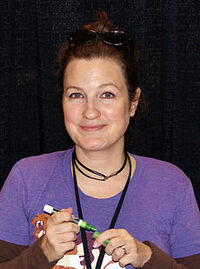 Amanda Conner is an American comic book artist and commercial art illustrator. She began her career in the late 1980s for Archie Comics and Marvel Comics, before moving on to contribute work for Claypool Comics' Soulsearchers and Company and Harris Comics' Vampirella in the 1990s. Her 2000s work includes Mad magazine, and such DC Comics characters as Power Girl and Atlee.

She will be one of the guests at the New York Comic Con 2013.

Retrieved from "https://reedpop.fandom.com/wiki/Amanda_Conner?oldid=4461"
Community content is available under CC-BY-SA unless otherwise noted.