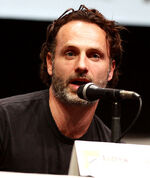 Andrew James Clutterbuck (born September 14, 1973), more commonly known as Andrew Lincoln, is an English actor, who is best known for his role as Rick Grimes on AMC's The Walking Dead. He is married to Gael Anderson, his father-in-law is legendary musician Ian Anderson of Jethro Tull.

English actor Andrew Lincoln, is the son of a civil engineer father and a South African mother, a nurse. He spent his early childhood in Hull before his family relocated to Bath when Lincoln was 10. He was learned at Beechen Clifferent School in Bath, and then the prestigious Royal Academy of Dramatic Art in London.

Lincoln's first big break came when he was cast as Edgar 'Egg' Cook in the popular UK drama series "This Life" (1996). Various roles followed including that of teacher Simon Casey in the Channel 4 series "Teachers" (2001), and as Mark in the hit film Love Actually (2003).

Lincoln made his first on-screen appearance in "Births and Deaths", a 1994 episode of Channel 4 sitcom Drop the Dead Donkey.[2] His first major role was Edgar "Egg" Cook, one of the lead characters in the highly successful BBC drama This Life. He went on to star as probationary teacher Simon Casey in the Channel 4 sitcom Teachers, and had a lead role as university lecturer and psychologist Robert Bridge in Afterlife. Lincoln appeared in several films, including Human Traffic and Love Actually, and directed two episodes in the third series of Teachers.

In 2009, he appeared in the stage production of Parlour Song. He starred in the Sky One series Strike Back with Richard Armitage, and starred alongside Vanessa Paradis in Pascal Chaumeil's Heartbreaker. In April 2010, Lincoln was cast as Rick Grimes, affecting a Southern USA accent in the live-action adaptation of the comic The Walking Dead, and narrated the project at the 2010 San Diego Comic-Con International.[1]

Retrieved from "https://reedpop.fandom.com/wiki/Andrew_Lincoln?oldid=4649"
Community content is available under CC-BY-SA unless otherwise noted.