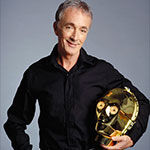 Anthony Daniels has been a headlining star at all six Star Wars Celebrations as well as Celebration Europe and Celebration Japan, bringing with him his inimitable stage presence and gift as a raconteur. Daniels has been part of the Star Wars saga from the very start, when George Lucas cast him in the role of C-3PO in 1975. From his first sight of Ralph McQuarrie's breathtaking illustration of a golden droid standing in the desert, Daniels fell in love with the character. As C-3PO, Daniels brought life, endearing humanity, and hapless humor to the droid, creating a world renowned movie character. He has played C-3PO across multiple media, from radio dramas to museum tours to theme park rides to breakfast cereal commercials.

Poor C-3PO missed the mark when he said, "I'm not one for telling stories. Well, not for making them interesting." Fluent in the most engaging forms of communication, Daniels will spin golden yarns from the making of the films, as well as his 35-year history with Star Wars, including serving as the narrator and of the Star Wars: In Concert series.

Daniels is a veteran stage performer, starting his career with the BBC Radio Drama Company in London. He went on to join the UK National Theatre at the Young Vic. The actor's singular wit, entertaining style and in-depth familiarity with the Star Wars phenomenon will make his appearance at Celebration one that cannot be missed. [1]

Community content is available under CC-BY-SA unless otherwise noted.
Advertisement