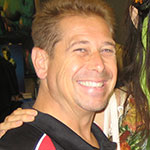 Tucci recently went “mainstream” with his hugely successful run on DC Comics’ “Sgt. Rock – The Lost Battalion”, “Jonah Hex” and several other bestsellers including “Batman”. He is currently working on three new creator-owned graphic novels for Crusade Fine Arts, "The Boys of Company Z”, “Victoria Cross" and the long awaited return of "Shi."

His earnest retelling of the Christmas story, “A Child Is Born” has quietly turned into a international blockbuster and winning the 2013 Christian Small Publisher Book of the Year Award.

The 2013 NYCC sees Tucci returning with an all new "Shi" 20th Anniversary Exclusive as he gears up 2014 with an all new miniseries, an "Art Of Shi" coffee table book, and celebration omnibus edition. [1]

Retrieved from "https://reedpop.fandom.com/wiki/Billy_Tucci?oldid=4565"
Community content is available under CC-BY-SA unless otherwise noted.