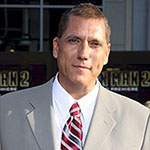 Bob Layton is one of the comics industry's true visionaries, creator, writer, artist, designer, and entrepreneur. Layton (with David Michelinie), reinvented the Iron Man comic in the late 70s, taking it from near-cancellation to one of Marvel's all-time best selling series which spawned the hit movies. His classic Iron Man story “Demon in a Bottle” was recently voted "one of the top 20 comic stories of all time." Bob also launched the first mini-series in comics’ history at Marvel with “Hercules: Prince of Power“ and created the record-breaking comic "X-Factor." After Marvel, Layton was CO-architect of the original Valiant Universe and served as its Editor-In-Chief. Bob currently works in Hollywood developing new properties for motion pictures and television, working with such stars as Edward James Olmos and Dane Cook. Mr. Layton will be appearing all four days exclusively at The Artist's Choice booth in Artist's Alley.[1]

Retrieved from "https://reedpop.fandom.com/wiki/Bob_Layton?oldid=4567"
Community content is available under CC-BY-SA unless otherwise noted.