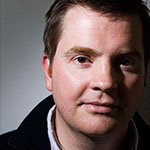 Based in New York City for the past sixteen years, Charles Soule is the current writer of Swamp Thing, Red Lanterns and Superman/Wonder Woman for DC Comics and Thunderbolts for Marvel. He released his "Strange Attractors" OGN earlier this year through Archaia - a story entirely focused on New York City and the incredible, joyous complexity of this amazing town.

NYCC 2013 will see the convention debut of his latest ongoing title, "Letter 44" (from Oni Press), a creator-owned story about a manned mission to the asteroid belt that exposes buried secrets -- both down here and up there.[1]

Retrieved from "https://reedpop.fandom.com/wiki/Charles_Soule?oldid=4582"
Community content is available under CC-BY-SA unless otherwise noted.