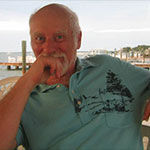 Chris Claremont writes both comics and prose. His initial unbroken 17-year run on Marvel Comics The Uncanny X-Men is the stuff of industry legend. The story arc “Dark Phoenix,” with its radical treatment of the story’s central character, paved the way for the reinterpretation of superhero mythos throughout the comics industry. His work is lauded for its anti-prejudice themes, and groundbreaking inclusion of minorities as heroes. With artist Frank Miller he created the Wolverine graphic novel that serves as the foundation for the forthcoming movie “The Wolverine” starring Hugh Jackman. His X-Men story arc “Days of Future Past” is the source material for the X-Men movie of the same title coming July 2014. Although best known for his work on Marvel Comic’s X-Men series, Chris has written other seminal characters such as Batman and Superman, and is the author of nine novels, with more on the way. He is published throughout the world in many different languages. His papers are archived in the Rare Book and Manuscript Library of Columbia University (New York City) and are available for research.

Chris’s current work includes a contemporary urban dark fantasy, Wild Blood, and his novel in progress is a thriller, Silk Road, set on that fabled route. [1]

Community content is available under CC-BY-SA unless otherwise noted.