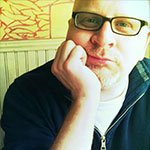 Cully Hamner draws comics, blows his horn, and is generally too big fer his britches. He has drawn many things for many people, but he's best known for his book RED (with Warren Ellis), which was released in 2010 as a feature film with a sequel released in 2013; BLUE BEETLE; THE QUESTION; a prequel to RED called RED: EYES ONLY, which he both wrote and illustrated; and THE SHADE with writer James Robinson, and NATIONAL COMICS with writer Jeff Lemire, starring the character Eternity, along with his heavy involvement in the "New 52" redesign of the DC Universe. His most recent projects have included ACTION COMICS, ACTION COMICS ANNUAL#2, and THE FLASH ANNUAL #2.[1]

Retrieved from "https://reedpop.fandom.com/wiki/Cully_Hamner?oldid=4600"
Community content is available under CC-BY-SA unless otherwise noted.