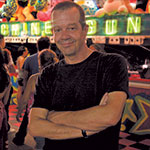 Darwyn Cooke is a graphic designer and animator who turned his attention to cartooning in the late nineties. Known primarily for his work on the DC line of superheroes, Cooke is currently adapting the Richard Stark: Parker series with IDW. Cooke has won multiple Eisner, Harvey and Shuster awards as well as the National Cartoonist Society's Best Series award.[1]

Retrieved from "https://reedpop.fandom.com/wiki/Darwyn_Cooke?oldid=4499"
Community content is available under CC-BY-SA unless otherwise noted.