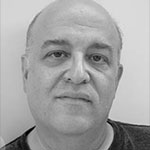 David Marquez made his comics debut in 2010 with the graphic novel, SYNDROME, from Archaia, earning a Russ Manning Award nomination for most promising newcomer. He now works as an exclusive artist for Marvel on titles such as ULTIMATE COMICS SPIDER-MAN and ALL-NEW X-MEN, and will be releasing his first creator-owned work, THE JOYNERS IN 3D, at the 2013 New York Comic Con.[1]

Retrieved from "https://reedpop.fandom.com/wiki/David_Marquez?oldid=4613"
Community content is available under CC-BY-SA unless otherwise noted.