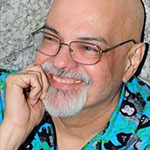 Bronx-born George Pérez, closing in on his 40th year in the industry, has drawn just about every major comic book character in existence. After lending his richly detailed renderings to many of the industry’s most celebrated and pivotal storylines like The Avengers, The New Teen Titans, Crisis on Infinite Earths, Fantastic Four, Sachs & Violens, JLA/Avengers, Wonder Woman, Infinite Crisis and Superman, to name but a few, George has recently signed on as Staff Artist for BOOM! Studios where he is busy drawing a bunch of the company's covers as well as creating, writing and drawing a new series slated for a late 2014 release. George will be sketching and autographing exclusively at The Artist's Choice booth in Artist Alley throughout the entire convention. Just come on over, look for his signature Hawaiian shirts (created by his multi-talented wife Carol Flynn), and ever-present smile and say "hello!"[1]

(Appearing exclusively at The Artist's Choice booth in Artist's Alley)

Retrieved from "https://reedpop.fandom.com/wiki/George_P%C3%A9rez?oldid=4501"
Community content is available under CC-BY-SA unless otherwise noted.