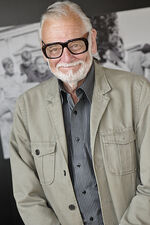 George A. Romero is considered the father of the modern horror film. His first feature, Night of the Living Dead (1968), redefined the genre, not only with its explicit violence, but also with a satirical view of American society that reflected the turmoil of the times.

Known for his intelligence and originality as a filmmaker, and his uncanny ability to scare, Romero made shorts, industrials, and commercials before co-writing, directing, filming and editing Night of the Living Dead on a budget of $114,000. A stark parable of the American family consuming itself, the film still has the power to shock and surprise.

Romero solidified his reputation as a master of the genre with Martin (1978), a lyrical, deeply disturbing story of a lonely boy convinced he is a vampire; and Dawn of the Dead (1979), in which a band of survivors trapped in a shopping mall is beset by zombies and their own personal demons. A powerful action film spiked with Romero’s signature pitch-black wit, it became one of the most profitable independent productions in film history.

Knightriders (1981) is among Romero’s personal favorites, a heartfelt film based on Arthurian legend, in which Ed Harris plays the leader of a troupe that stages medieval fairs with knights jousting on motorcycles instead of horses.

In 1982 Romero made Creepshow, a smart and boldly stylized film, featuring a script by Stephen King and a cast of well-known actors. Day of the Dead, the third in Romero's zombie saga, a progressive, eerily claustrophobic film was released in 1985.

In 1988, Monkey Shines became Romero's first studio-produced film and introduced him to Peter Grunwald, with whom he eventually formed Romero-Grunwald Productions. The film was hailed by Newsweek as a “white-knuckle triumph”.

In 2000 Romero made Bruiser, a taught, frightening and highly original tale of revenge, which at the time was his most exciting, stylish and accomplished film.

Romero’s Land of the Dead (2005), his largest-budget studio-backed film, was released by Universal Pictures and garnered exceptional critical acclaim in addition to becoming one of the most successful of Romero's films at the box office.

Diary of the Dead (2006), Romero’s most personal project since Night of the Living Dead, marked his return to his independent filmmaking roots and launched a new cycle of zombie films in the genre he invented. He proud He proudly described it as one that “comes from my heart. It's not a sequel or a remake. It's a whole new beginning for the dead.” The film was distributed by The Weinstein Company to critical and commercial success.

Romero lives in Toronto with his wife, Suzanne, and is currently at work on a new franchise that will.[1]

Retrieved from "https://reedpop.fandom.com/wiki/George_Romero?oldid=4653"
Community content is available under CC-BY-SA unless otherwise noted.