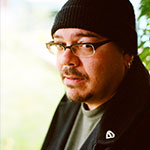 Greg Rucka is the New York Times bestselling author of almost twenty novels, including the recent ALPHA, published by Mulholland Books. He was won multiple awards for his work in comics over the years, including five Eisners. He has written for both Marvel and DC, including runs on Detective Comics, Wonder Woman, Wolverine, and the Punisher. His creator-owned work has garnered wide acclaim, including Stumptown, drawn by Matthew Southworth, Queen & Country, and Whiteout, drawn by Steve Lieber, all of them published by Oni Press. Currently, he writes the series LAZARUS, co-created with artist Michael Lark, and published by Image Comics. Additionally, he is the co-creator and writer of the webcomic series Lady Sabre & The Pirates of the Ineffable Aether, drawn by Rick Burchett, which you can find www.ineffableaether.com. He lives in Portland, Oregon, with his wife, writer Jennifer Van Meter, and their two children.[1]

Retrieved from "https://reedpop.fandom.com/wiki/Greg_Rucka?oldid=4505"
Community content is available under CC-BY-SA unless otherwise noted.