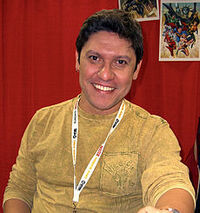 Ivan Reis is a Brazilian comic book artist. He is known for his work on books such as Marvel Comics' Captain Marvel, and DC Comics' Green Lantern books. According to collaborator Geoff Johns, Reis' drawing style resembles a combination of Alan Davis and Neal Adams.

Retrieved from "https://reedpop.fandom.com/wiki/Ivan_Reis?oldid=4466"
Community content is available under CC-BY-SA unless otherwise noted.