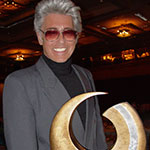 Jim Steranko, an illustrator, musician, art director, magician, fire-eater, designer, escape artist, filmmaker, pop-culture lecturer, and publisher, has cut a ferocious path through the entertainment arts. The more than 100 innovations he created as artist-writer on Marvel's Nick Fury Agent of S.H.I.E.L.D., Captain America, and X-MEN revolutionized the comics form and, as an illustrator, he painted a multitude of book covers, record jackets, and movie posters, including 30 Shadow paperbacks. He has shown his work at more than 300 exhibitions worldwide, including the Louvre in Paris and the Smithsonian Institution in Washington. His two volumes of The History of Comics have sold more than 100,000 copies and as editor-publisher of the international entertainment magazine PREVUE, he conducted hundreds of star interviews and penned more than three million words. As a filmmaker, he has collaborated with Steven Spielberg, George Lucas, and Francis Ford Coppola on some of their most popular movies. Steranko has been cited by Michael Chabon as an inspiration for his Pulitzer Prize-winning novel, The Amazing Adventures of Kavalier and Clay, by Jack Kirby as inspiration for Mister Miracle, and, by WIZARD as one of the Top Five Most Influential Comicbook Artists of All Time. Recent projects include Domino Lady: The Complete Collection(Vanguard), The Discovery Channel's Comic Book Superheroes Unmasked documentary, the Steranko Calendar-Portfolio (Vanguard), STARZ network's Comicbooks Unbound, the 2010 Steranko exhibit at the Geppi Museum in Baltimore, recent covers for Image comics, Radical Publishing, The Spider, DC Comics' Before Watchmen series and writing an episode of Cartoon Network's Justice League series. Steranko is appearing as a Special Guest of NYCC and in support of his upcoming Vanguard art book. Meet this living legend and Twitter sensation at the Vanguard booth.[1]

Retrieved from "https://reedpop.fandom.com/wiki/Jim_Steranko?oldid=4510"
Community content is available under CC-BY-SA unless otherwise noted.