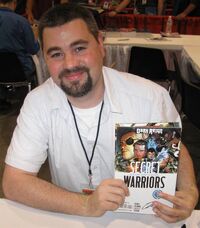 Jonathan Hickman is an American comic book writer and artist. He is known for the creating the Image Comics series The Nightly News, The Manhattan Projects and East of West, as well as working on Marvel Comics' Fantastic Four, FF and S.H.I.E.L.D titles. It was announced that in fall of 2012, Hickman would end his run on the Fantastic Four titles to write Avengers and New Avengers, as part the "Marvel NOW!" relaunch.

Retrieved from "https://reedpop.fandom.com/wiki/Jonathan_Hickman?oldid=4471"
Community content is available under CC-BY-SA unless otherwise noted.