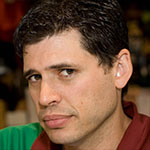 Brooks was a member of the Saturday Night Live writing team from 2001 to 2003, for which he won an Emmy. He also has a number of acting credits, including appearances on Roseanne and 7th Heaven, and voice work for Batman Beyond and Justice League.[1]

Retrieved from "https://reedpop.fandom.com/wiki/Max_Brooks?oldid=4518"
Community content is available under CC-BY-SA unless otherwise noted.