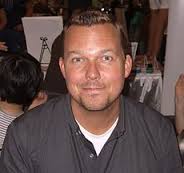 Rick Remender is an American comic book writer and artist who resides in Portland, Oregon. He is best known for his work on Marvel Comics' Punisher series, as well as Fear Agent, Uncanny X-Force, and Venom.

He will be one of the guests featured at the New York Comic Con 2013.

Retrieved from "https://reedpop.fandom.com/wiki/Rick_Remender?oldid=4479"
Community content is available under CC-BY-SA unless otherwise noted.