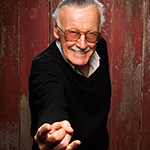 Stan Lee is known to millions as the man whose Super Heroes propelled Marvel to its preeminent position in the comic book industry. His co-creations include Spider-Man™, The Avengers™, X-Men™, Iron Man™, The Incredible Hulk™, The Fantastic Four™, as well as hundreds of others. He introduced Spider-Man™ as a syndicated newspaper strip that became the most successful of all syndicated adventure strips and has appeared in more than 500 newspapers worldwide. Stan currently remains Chairman Emeritus of Marvel, as well as a member of the Editorial Board of Marvel Comics.

Stan is currently the Chairman & Chief Creative Officer of POW! Entertainment, a multimedia entertainment company based in Beverly Hills, CA, which he founded with production partner Gill Champion & the late intellectual property specialist Arthur Lieberman. POW! has debuted several titles in the publishing sphere, including Solider Zero, Traveler, and Starborn with Boom Comics, Stan Lee and the Mighty 7 with Archie and A Squared Entertainment, and Romeo and Juliet: The War with 1821 Comics. Stan has been involved in creating five feature film scripts, including Annihilator with Magic Storm Entertainment and Prodigal. He is also involved with the creation of a live action musical for a casino in Macau called Yin and Yang: The Battle of Tao. Additionally, he is working on the creation of an Indian and South American superhero franchises.[1]

Retrieved from "https://reedpop.fandom.com/wiki/Stan_Lee?oldid=4529"
Community content is available under CC-BY-SA unless otherwise noted.