Back in August when we began the Wikia Battle of the Fantasy Foods bracket tournament, we promised that we’d take the Final Four foods and serve them live from a New York Comic Con food truck. This past weekend, we delivered on that promise! 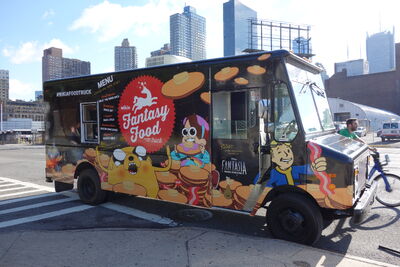 We drove this beautifully wrapped truck onto the floor of the Javits Center in New York City, and served these tasty fantasy treats to the crowd: Gravity Falls’ Smile Dip, Fallout’s Nuka Cola, Adventure Time’s Bacon Pancakes, and Waframe’s Greedy Milk. We added one bonus item - the Fantasia Meat the Band-wich - in honor of Disney’s Fantasia game being demoed at our truck.

Here are quick descriptions of each item: 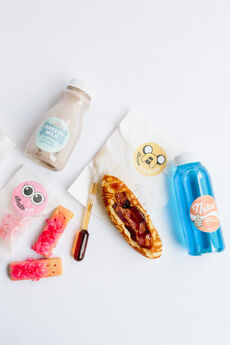 Bacon Pancakes
Organic hickory bacon enrobed in a fluffy buttermilk pancake, served with a side of syrup

We served over 1,000 pieces of Fantasy Food over the days of the show, and saw dozens of tweets about the truck and the foods. Check out #wikiafoodtruck on Twitter  to see them all.

Take a look at some of our photos from the event; and if you were there, let us know what you thought of the foods in the comments below!

Retrieved from "https://reedpop.fandom.com/wiki/User_blog:Acardwell415/Wikia%27s_Fantasy_Food_Truck_at_New_York_Comic_Con_2014?oldid=6054"
Community content is available under CC-BY-SA unless otherwise noted.