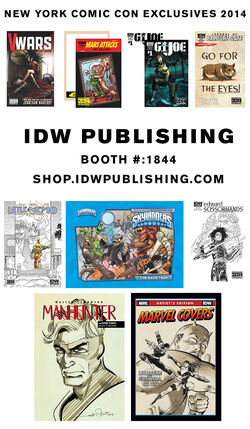 New York Comic-Con is coming soon, and IDW has finally announced some cool exclusives that will be available at the 2014 Con! Keep reading to see what's available. If you're interested in their FULL shopping guide, just click here!

THERE IS SOMETHING FOR EVERYONE!

Retrieved from "https://reedpop.fandom.com/wiki/User_blog:Gcheung28/IDW_2014_Exclusives_at_NYCC?oldid=5493"
Community content is available under CC-BY-SA unless otherwise noted.