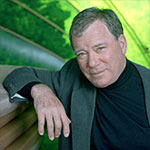 William Shatner has cultivated a career spanning over 50 years as an award-winning actor, director, producer, writer, recording artist, and horseman. He is one of Hollywood's most recognizable figures and a major philanthropist.

In 1966, Shatner originated the role of "Captain James T. Kirk" in the television series Star Trek. The series spawned a feature film franchise where Shatner returned as Captain Kirk in seven of the Star Trek movies, one of which he directed.

He won Emmys and his first Golden Globe for his portrayal of eccentric lawyer "Denny Crane" on both The Practice and Boston Legal. He received four more Emmy nominations as well as other Golden Globe and SAG Award nods.

Shatner's Raw Nerve, currently airing on Bio, is his own edgy, celebrity interview series. Each episode showcases Shatner getting to know his guest on an intensely personal level, touching upon subjects not normally visited on other talk shows. Guests have discussed topics such as addiction, grief, childhood, marriage, combat and parenthood.

His love of music inspired him to record the critically acclaimed album Has Been. The Milwaukee Ballet performed "Common People," a dance presentation set to several numbers from the record; the event and its preparations are featured the documentary Gonzo Ballet, which played to sold out houses at film festivals worldwide.

Mr. Shatner's newest musical project, a space-inspired album Seeking Major Tom, featured a large number of heavy metal covers as well as songs by U2, Frank Sinatra, Queen and Pink Floyd, and was released in October 2011.

Off the screen and broadcast waves, Shatner has authored nearly 30 best-sellers in both the fiction and non-fiction genres. His autobiography, Up Till Now, was a New York Times best-seller. Shatner's newest book, Shatner Rules was released in October 2011.

A comic book series – William Shatner Presents – debuted in summer 2009. The series is based on three novels of Shatner's: Tek War, Man O' War, and Quest for Tomorrow, along with a brand new title: Chimera.

Shatner has been successful in another area — horse breeding. A longtime dedicated breeder of American Quarter horses, he has had enormous success with the American Saddlebred, developing and riding world champions and has won numerous world championships in several equine events. His passions for horses and philanthropy were united when he started the Hollywood Charity Horse Show. The annual event benefits Los Angeles-based children's charities.

Shatner continues to act, write, produce and direct while still making time to work with charities and further his passion in equestrian sports. He and his wife, Elizabeth and three married children live in Los Angeles. [1]

Retrieved from "https://reedpop.fandom.com/wiki/William_Shatner?oldid=4640"
Community content is available under CC-BY-SA unless otherwise noted.